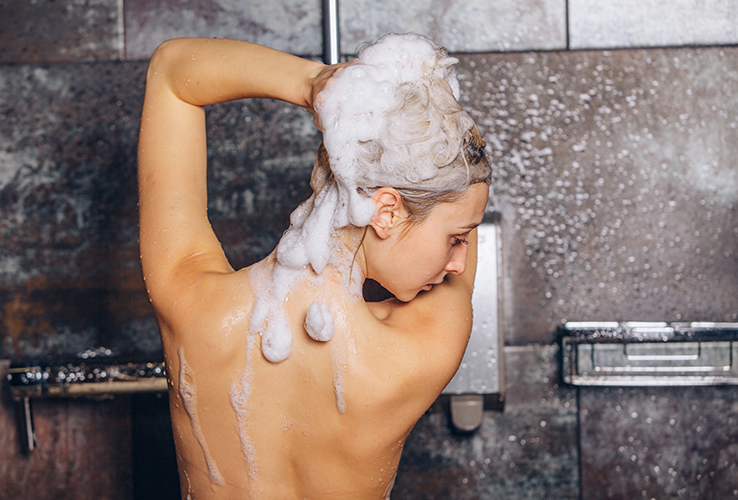 Here’s a pop quiz: what do industrial cleaning agents, engine degreasers, and the bottle of conventional shampoo in your shower have in common? Answer: they all contain sodium lauryl sulfate.

Sodium lauryl sulfate (SLS) is incredibly common in personal care items, but don’t let that make you think it’s safe: it’s also connected with some incredibly troublesome health issues. I never use SLS in any of my products, and it doesn’t take much to explain why.

What is Sodium Lauryl Sulfate?

Sodium lauryl sulfate is a surfactant, which is a chemical that breaks down surface tension. The result? More effective cleaning and lots of big bubbles. SLS is cheap to produce, and it creates the type of lather that people have been conditioned to think means “clean,” so it’s a staple of conventional personal care. It’s also a staple in industrial cleaning products, so if you have an engine that needs to be degreased it can do that too.

Where Can You Find Sodium Lauryl Sulfate?

What are the Dangers of Sodium Lauryl Sulfate?

Listen in on the discussion going on about SLS and it’s easy to get confused. One side says that there is a link between SLS and cancer, while the other says these reports are overblown. I prefer to err on the side of caution and avoid SLS completely, especially when you take some of its other dangers into consideration:

– Skin Irritation: A report published by the American College of Toxicology found that even low concentrations of SLS can cause harmful skin irritation.

– Skin Corrosion: High concentrations of SLS can cause severe irritation and corrosion of the skin. Contact with products that contain 1% of this ingredient can cause irritation. Some cleaning products contain levels as high as 20%.

– Mouth Sores: SLS destroys oral mucosa, which irritates the mouth and can cause canker sores.

It’s also important to note that while SLS itself may or may not be directly linked to cancer, it isn’t always used in its purest form. Depending on how it is manufactured, sodium laurel sulfate and its cousin sodium laureth sulfate may be contaminated by dioxane, a suspected carcinogen. Our bodies can’t metabolize dioxane effectively, which allows it to build up over time.

What Alternatives are There to Sodium Lauryl Suflate?

Thankfully we live in a world where there are numerous alternatives to this cheap, potentially harmful ingredient. One of my favorites is coconut oil, which can create a lovely lather when combined with other ingredients. There’s also Castile Soap, an olive oil based cleanser that has been used for centuries in the Castile region of Spain.

I don’t know about you, but I like to treat my body a little more gently than I’d treat industrial equipment. That’s why I never, ever include sodium lauryl sulfate in my products. It’s just not worth it.

Have you found SLS in unlikely products? Let us know in the comments below so others can look out for it too.